Not to be Outdone!

Here we have the Wednesday Ladies contributions to the Challenge. Some very thoughtfull and novel ideas. Make a cuppa and take a look.

You can read more about Carol's piece on her blog here


I am sure you will agree, there has been a great deal of thought and effort has gone into this years Challenge. It was the least moaned about. No black looks sent my way.  Hmmmm

We will see how 2014 Challenge goes down - yes, it has been decided.

Rising to the Challenge


Those of you who are familiar with Higham Piecemakers will know that before we break up at Christmas, we give the ladies a bit of a "Challenge" to be completed by a given date.
There is usually a lot f moaning and groaning about the subject, but not this year.


Everyone was given a fat 1/4 f red fabric, some thread and some beads.
This was this years challenge.
Your Challenge this year --- Commemorate the 100th Anniversary of the Beginning of the
1st World War.  Use some or all of the fabric to make ANY item of your choice with World War 1 in mind. You can purchase more of the fabric if you wish. You do not HAVE to use the beads or thread if you do not want to.  You may keep your finished item or we could donate some items to the British Legion for them to fund-raise for their cause.

Today was the date.


And the  ladies have definitely risen to the challenge. 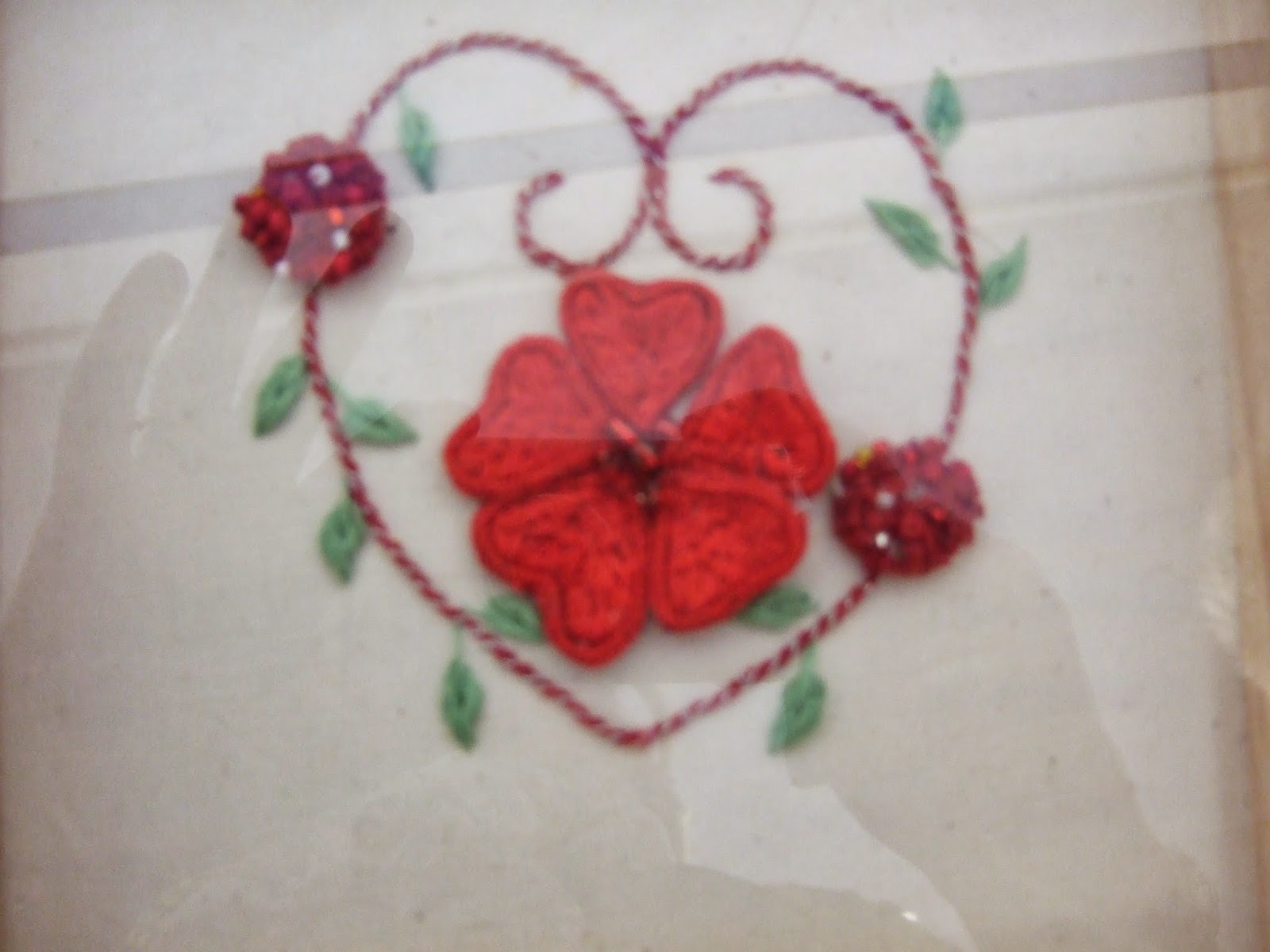 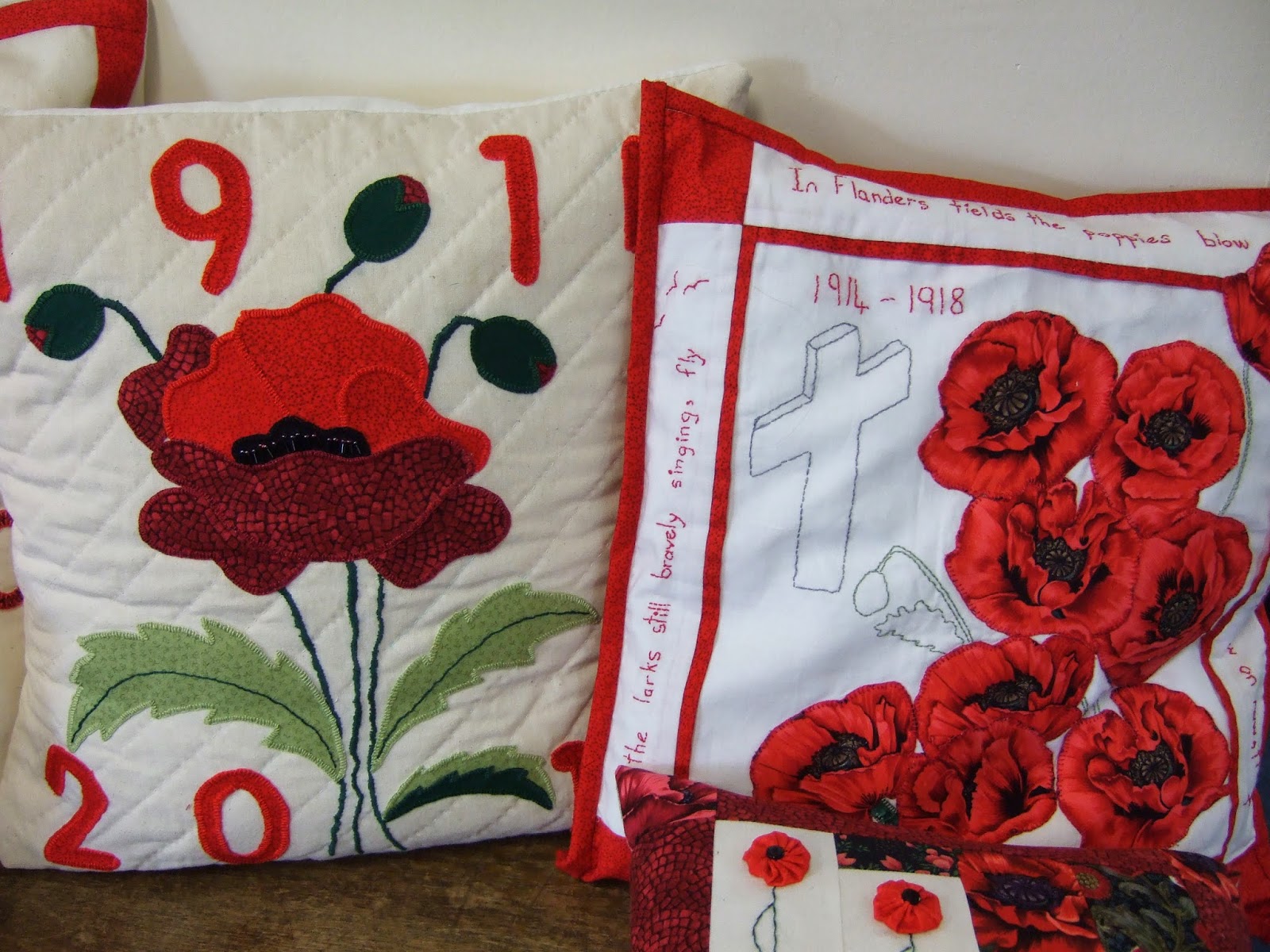 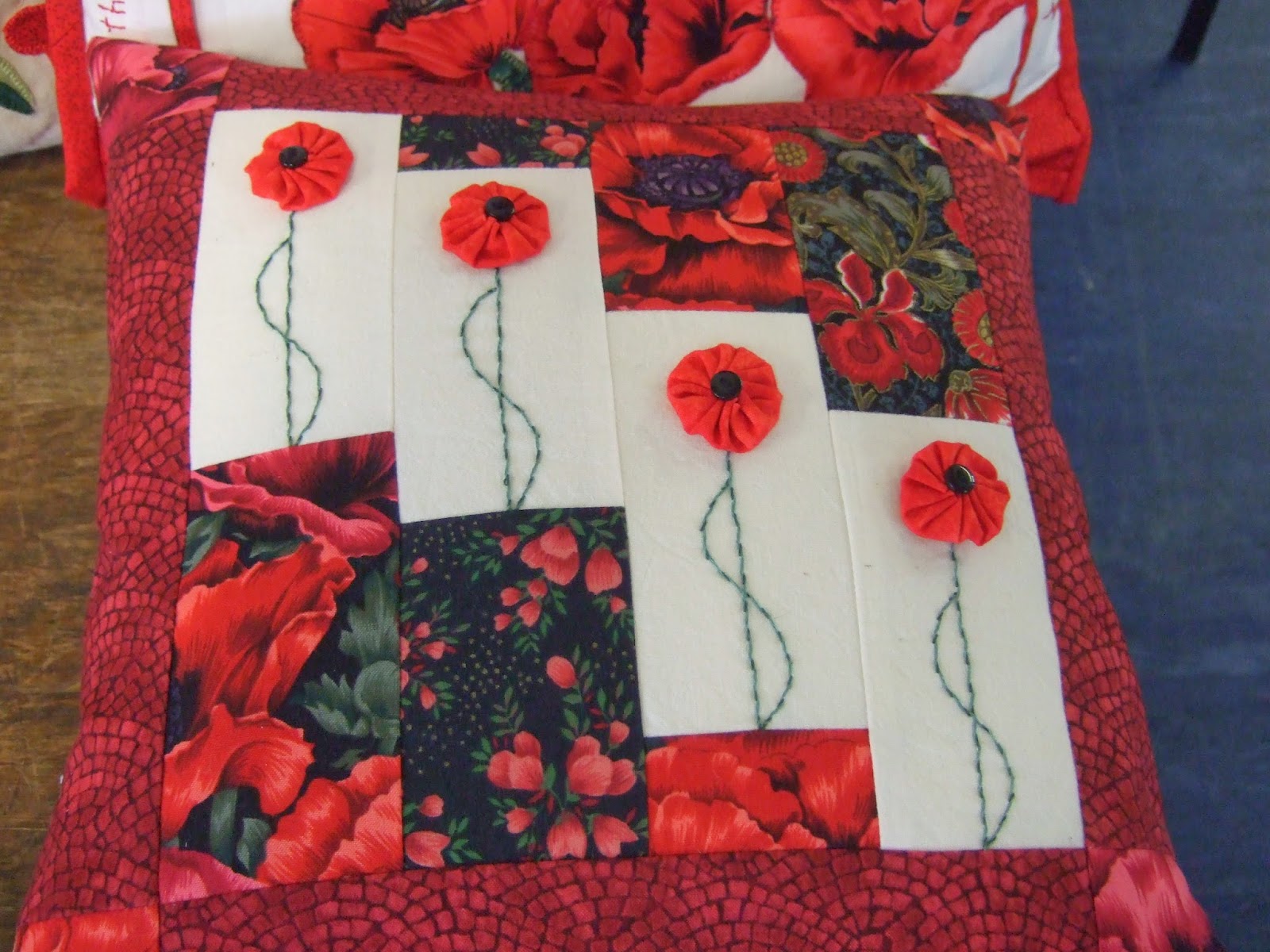 I will try to get a better shot of this on Wednesday (still need a new camera!!)

I will takes more pics on Wednesday and add some of todays items that I have missed here.

We have been talking, and think that this years Challenge needs to be exhibited somewhere. Any ideas ladies? Maybe at the Open Gardens in June? Let the committee know what you think, Or add your comments to the blog.

We will approach the Royal British Legion in Higham Ferrers to see if they would like to use the items  to raise some funds.
Posted by Higham Piecemakers at 19:28 12 comments:

On Wednesday .....
Jackie has finished her friends quilt. Its lovely, but Jackie found it really hard to work in colours and fabrics that were not her choice. It was made "quilt as you go" and she has made a great job of it. I am sure that the lady who asked for it to be made will be thrilled with it.


And then we had the start of the Celtic Block workshop ----- 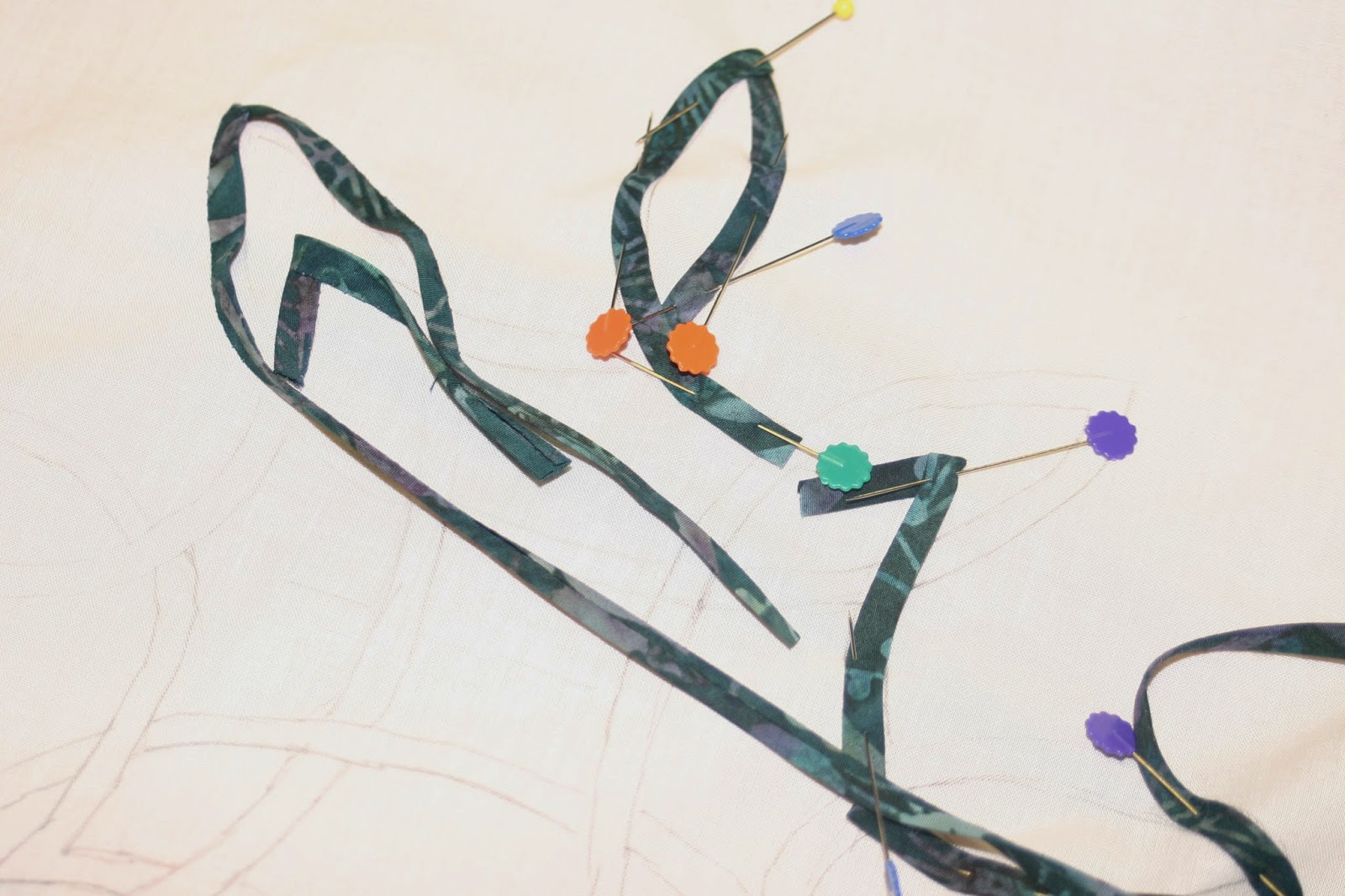 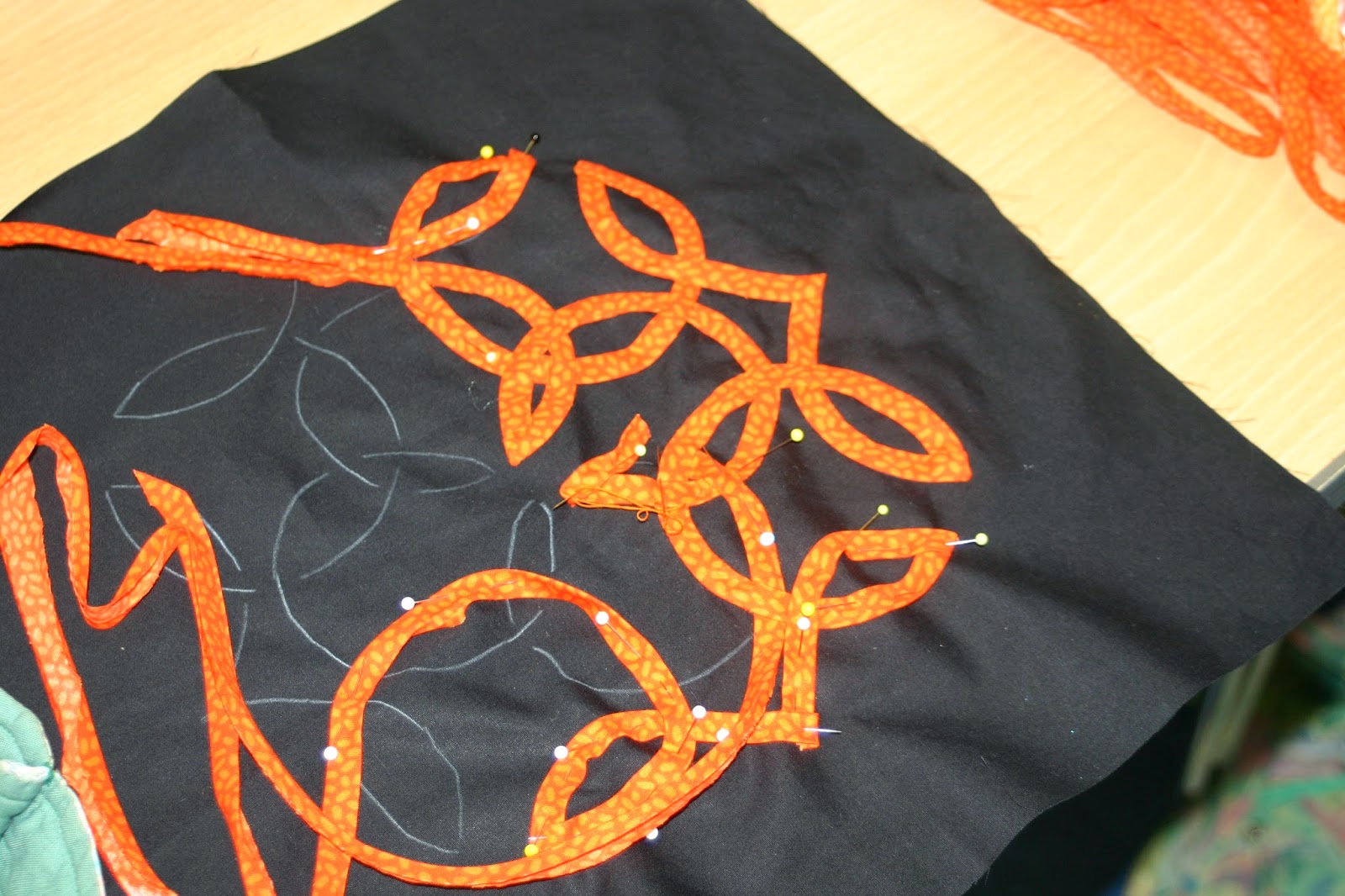 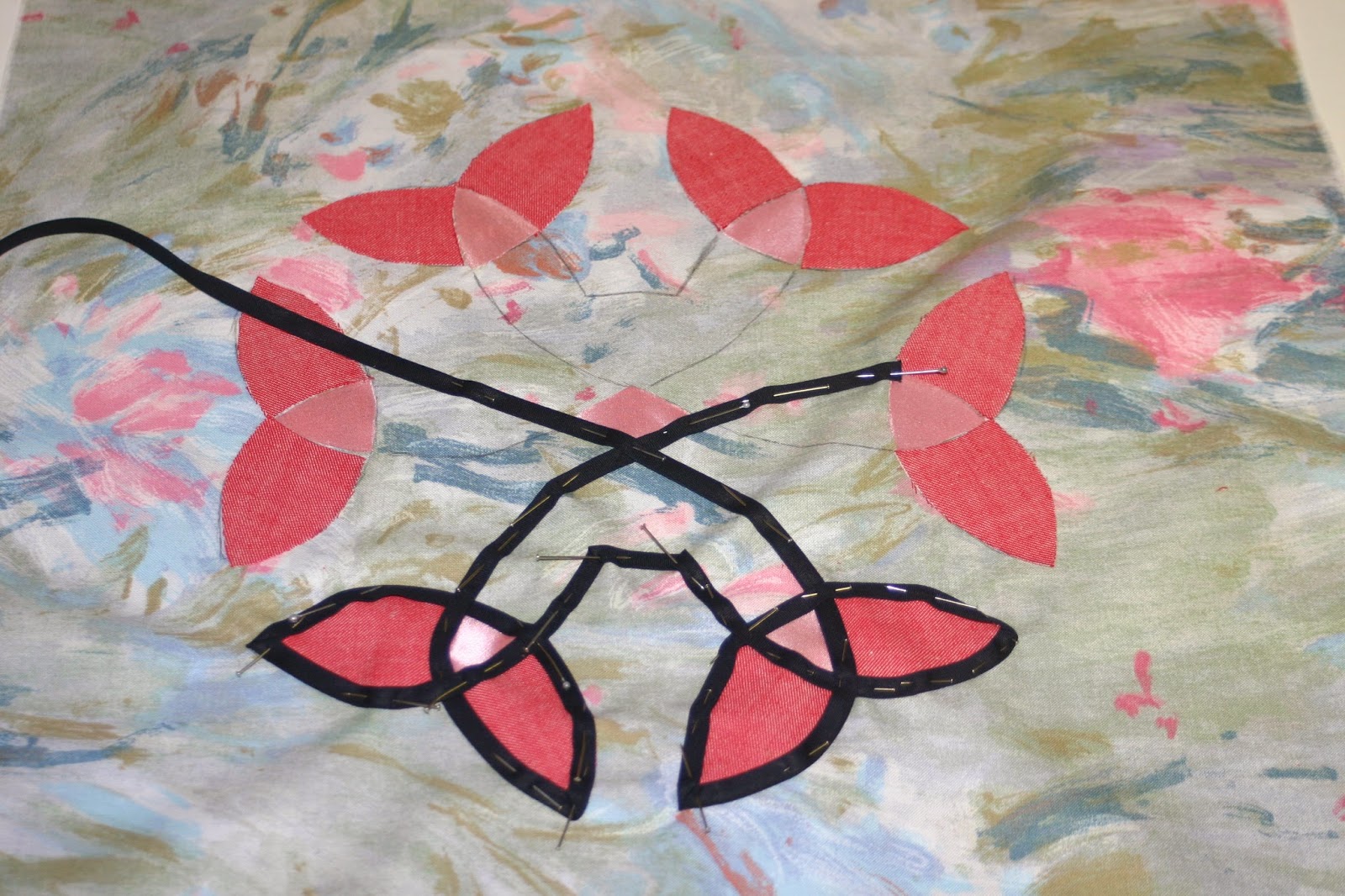 1) Only pin a small amount of the design down and start to sew in place, as the strips are cut on the bias they tend to stretch a bit and so all of your pinning will need to be moved along.

2) if you put your pins in the back of the work, your thread wont keep getting caught around the ends of the pins.

Barbara was sewing some very small hexagons
Elizabeth was sewing down the binding on another celebration quilt gift
And Monday's offering......

Well, it might just be me --- but it was so calm and quiet at group this morning!  I had had a very hectic weekend with Miss O staying for a few days. I am looking after her in three weeks whilst Mummy goes on a hen do, and I think she wanted to make sure I was not going to break her beautiful girl.

But back to Group.  It was just lovely. Some were tracing, some were pinning and some were stitching. There was chat and laughter but either I was in a stupor or it was... serene! 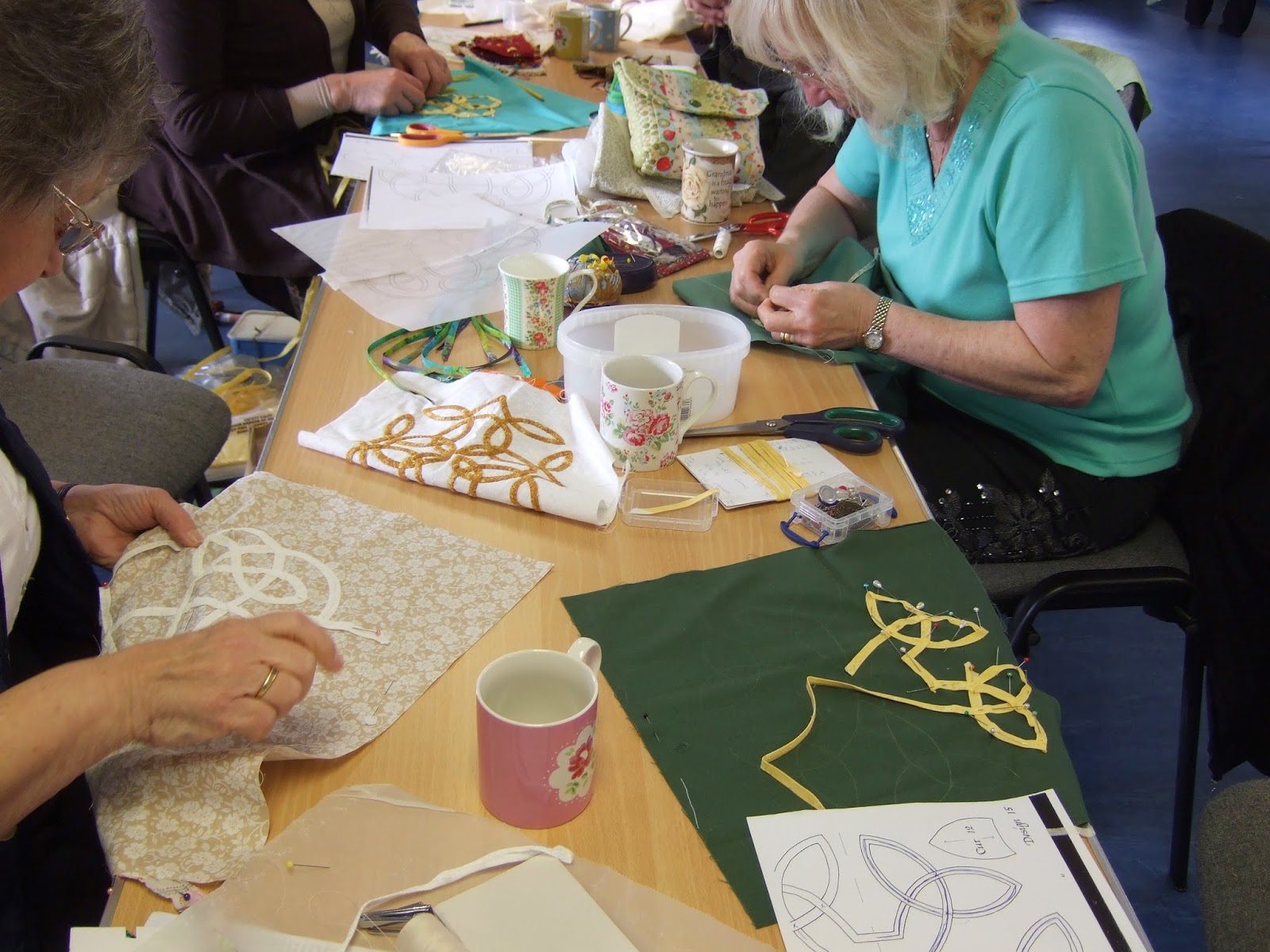 Not everyone was using a pale background so transferring the pattern was a bit of a problem until some dressmakers carbon paper was produced and used to trace the pattern.
Ellen was getting on really well (swot!) 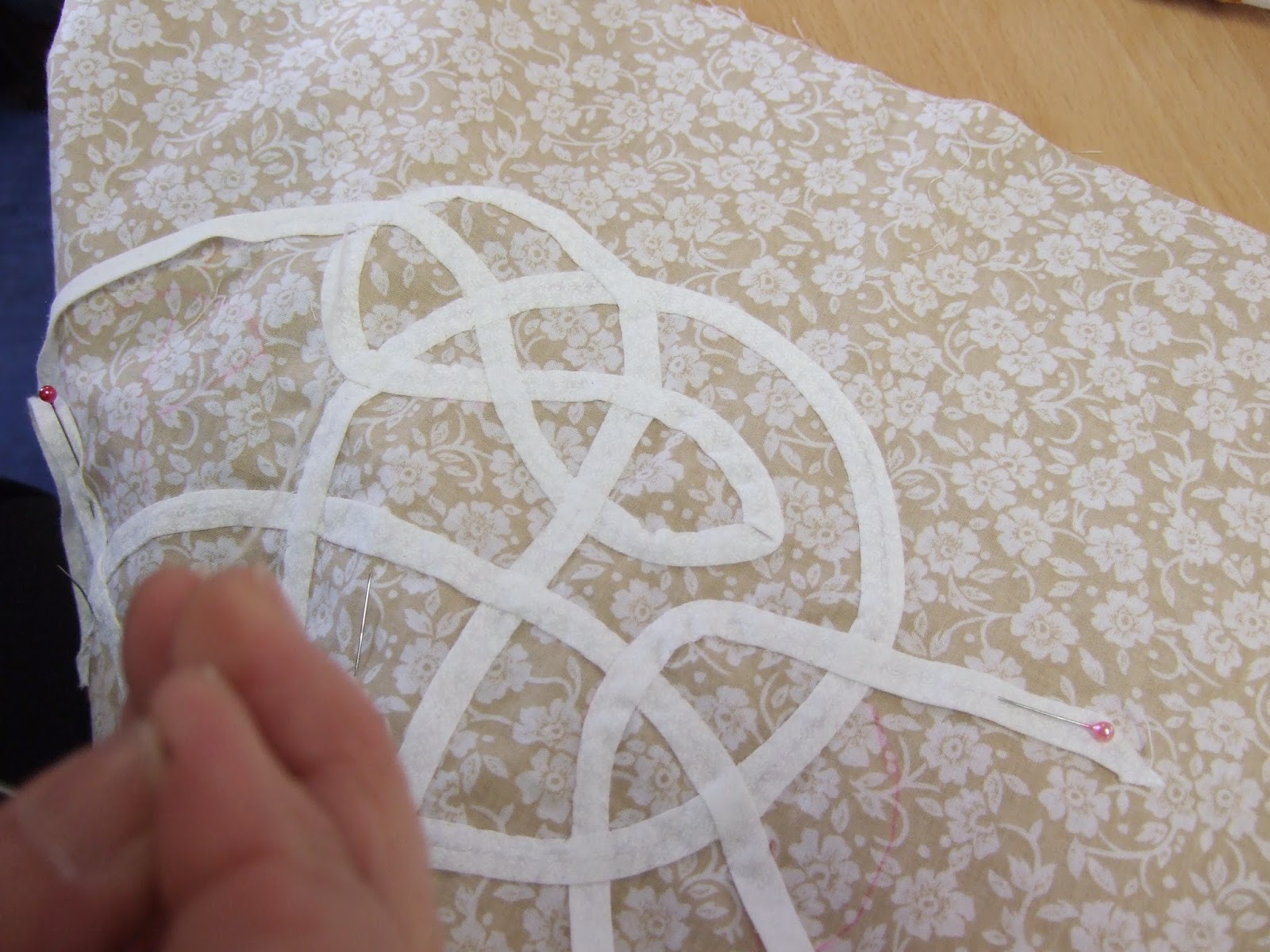 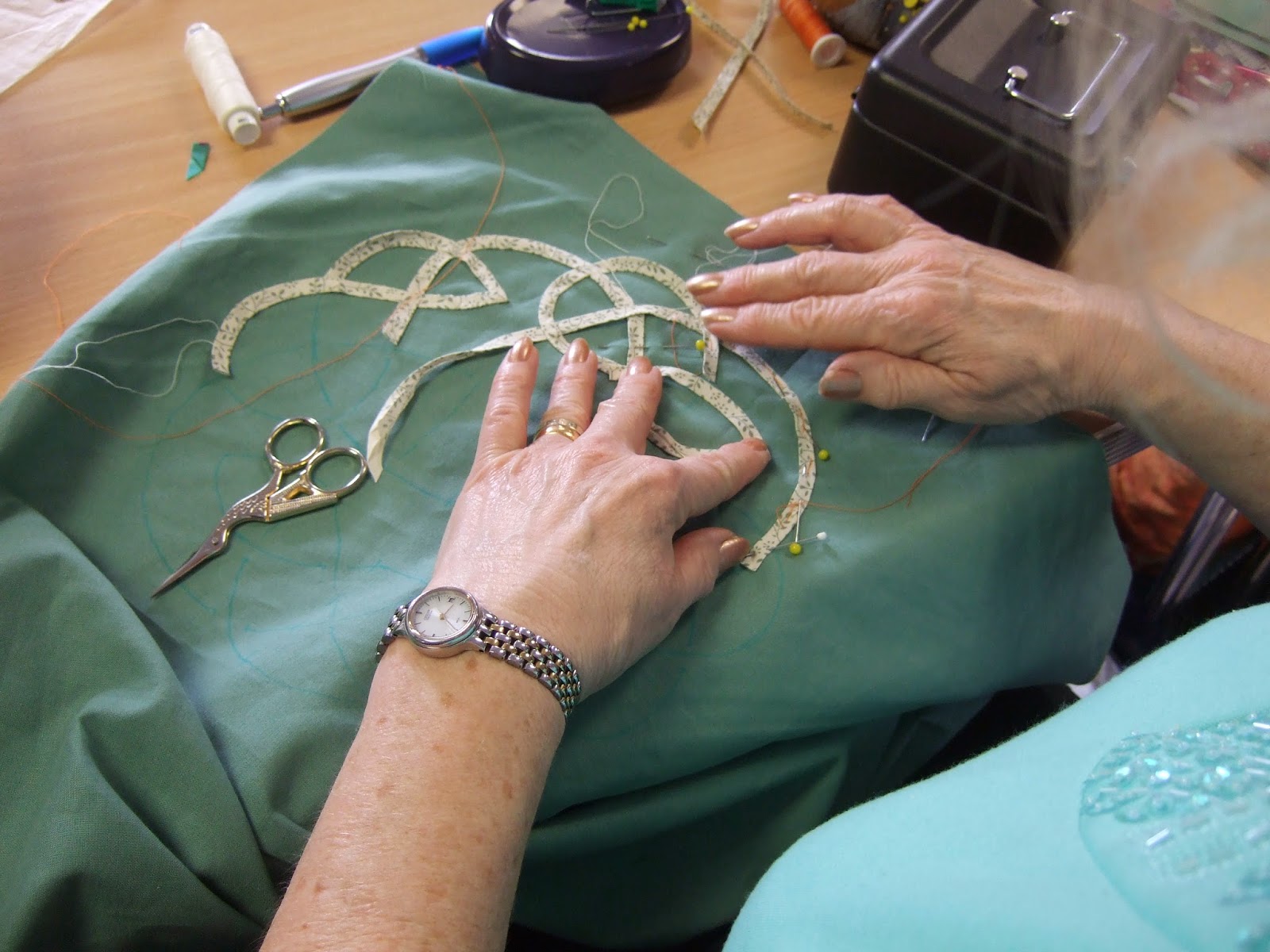 And Di was adding fillers to her loops 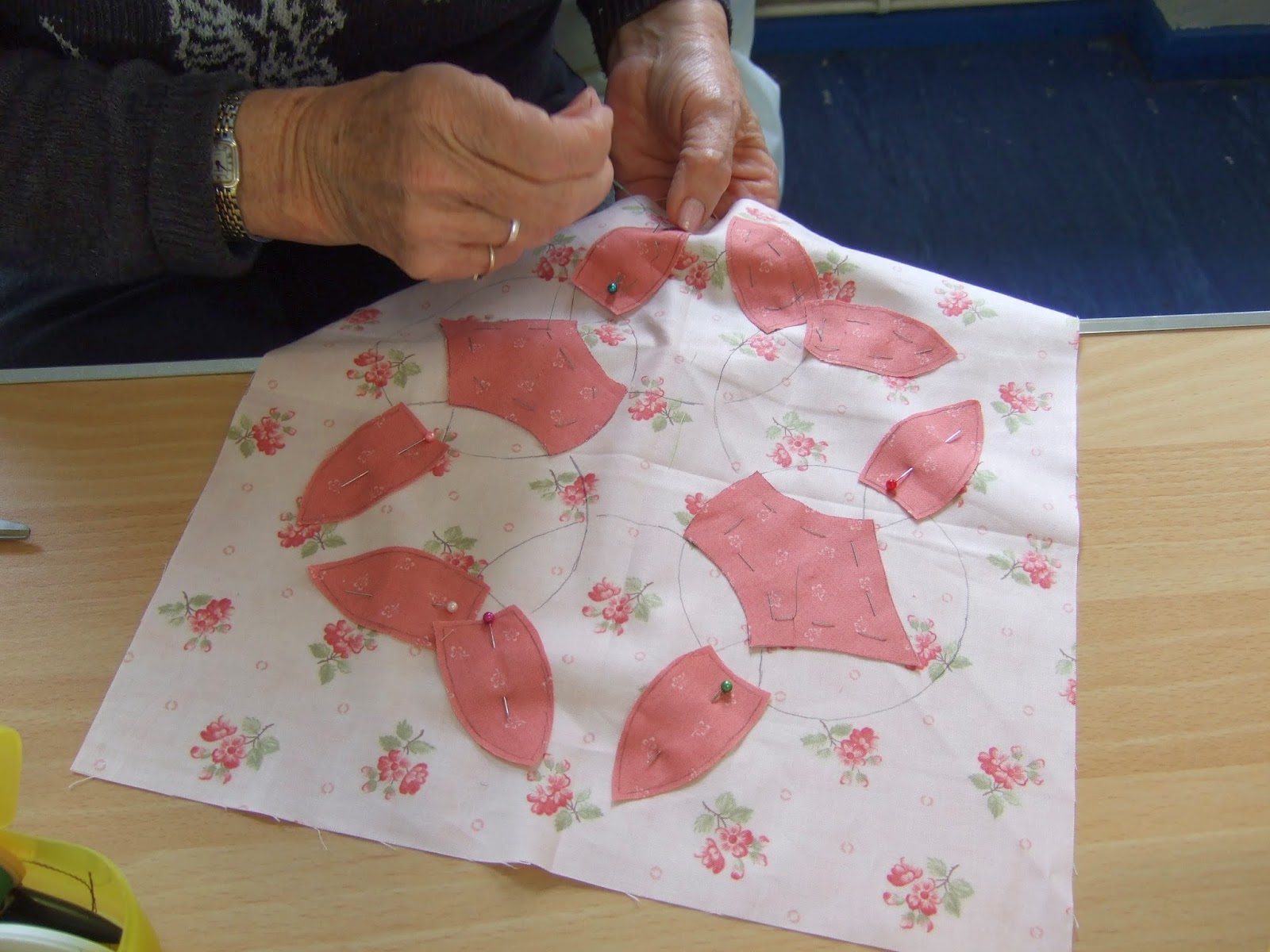 I will show you the finished items soon.

Carol came in after her mornings Nordic walk to show us a similar technique, Italian Corded Quilting, which she first tried out a loooooong time ago at school. This was well admired and is in the "project for the future" folder.

And back to the camera problem. RUBBISH photo so I will try that again some other time!

I DO need a new camera.

You may remember that we had been given an over-locker to add to the group equipment. Well we had it serviced and it sews like a dream.  I managed to un-thread it by accident (every over-lockers nightmare) but with a bit of a wriggle and tweak and with Pat's supervision I managed to re thread it and away we went. 11 pairs of shorts later --- 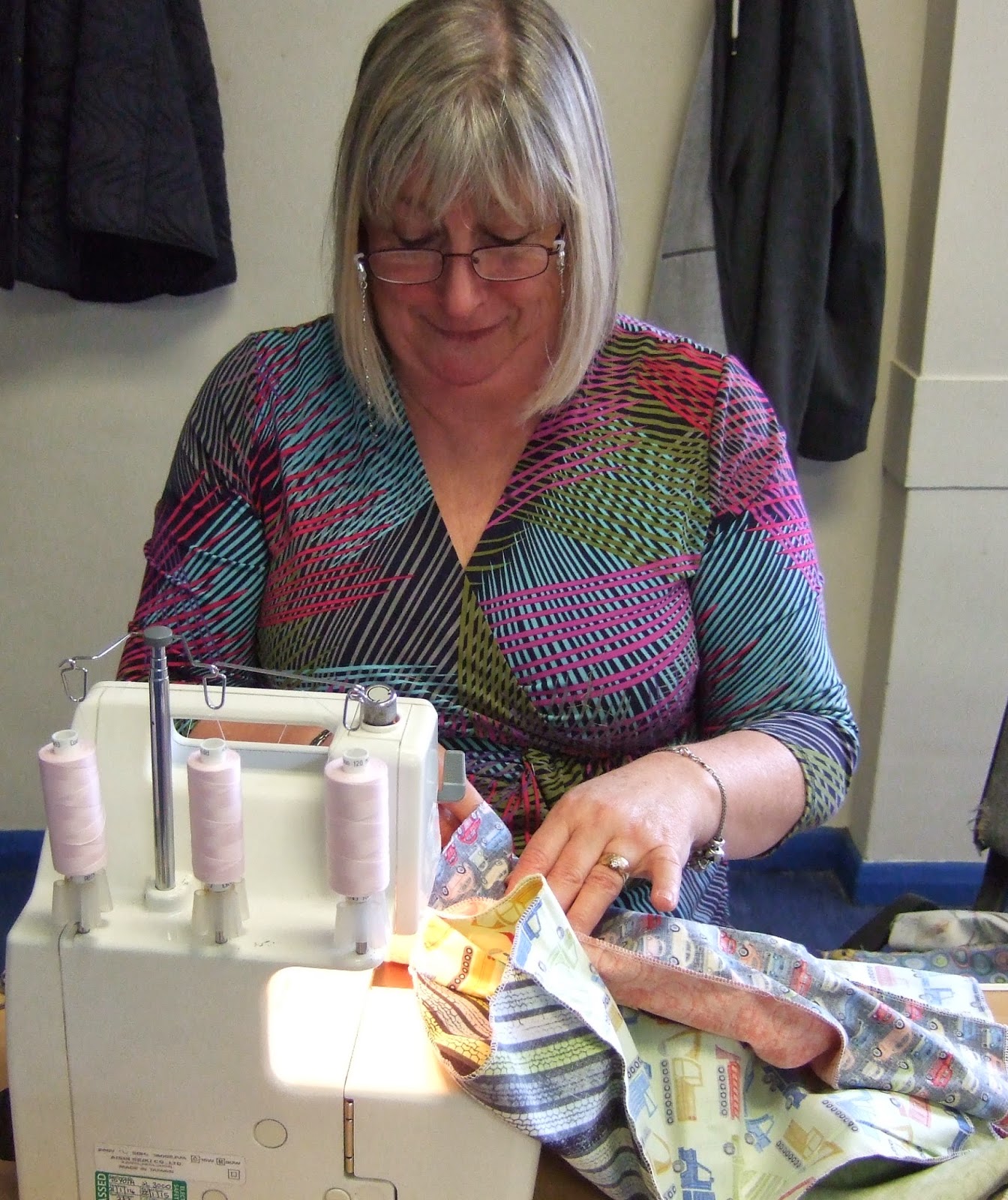 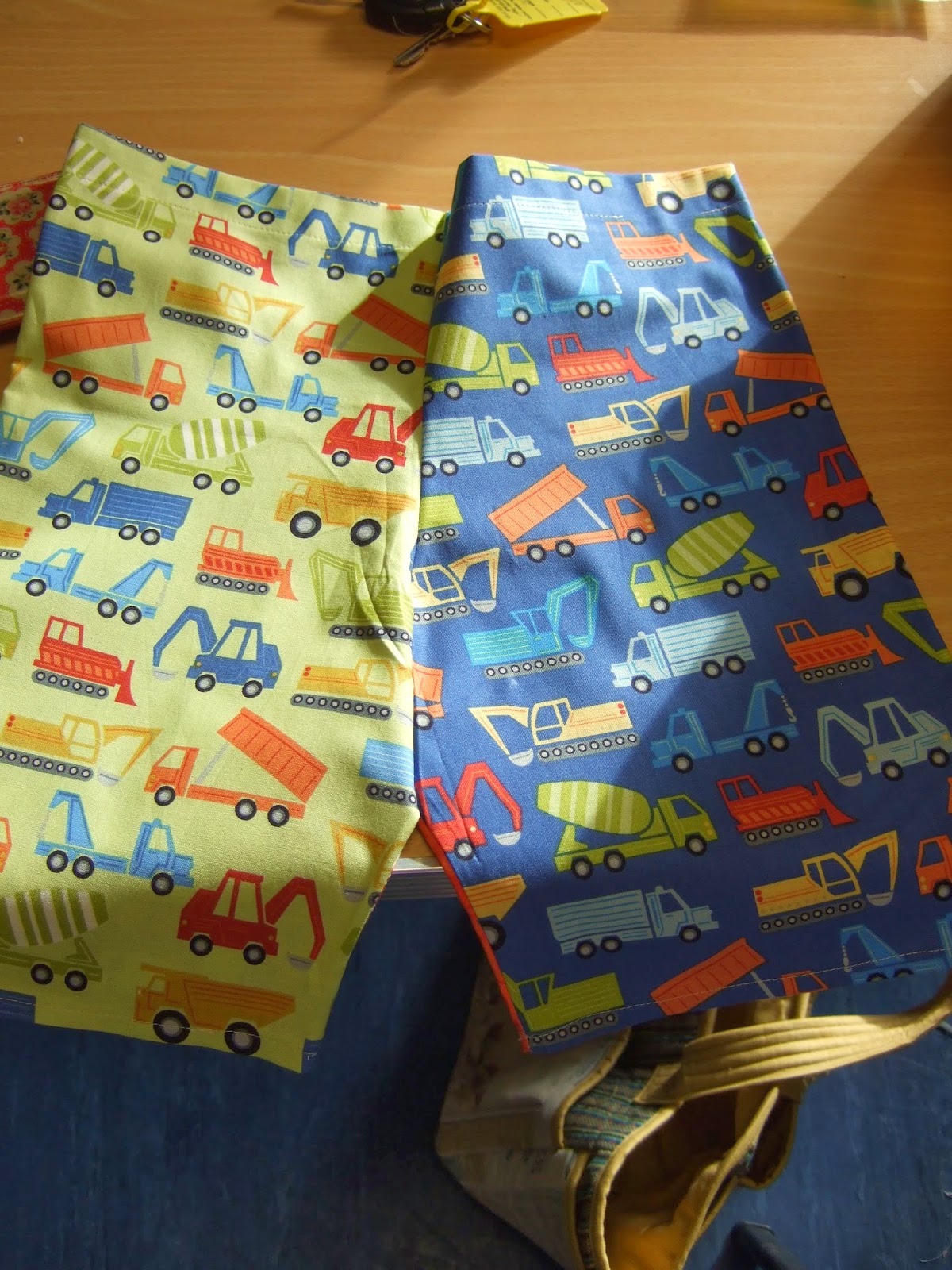 Didn't have enough of any one fabric to make a pair, so each of the four pieces is different , and though I say it myself, they are FAB. Thank you to Jayne Smith for donating some of her fabric sampling. These will be sent overseas by St Mary's Church in Rushden via this charity  and if you wanted the pattern (which is so easy to make, especially if you use the over locker!) you can find it here

I have collected the rest of the LINUS quilts to be passed over this week, and our totaliser shows 171 quilts made this time!!

A BIG WELL DONE AND THANK YOU GIRLS!!

And for those of you who don't already know Our Carol has her own blog here . I have added it to the reading list, but stop by and say "Hello" .